Rhinoplasty surgery for Men, a form of surgery also known as a nose job, is a procedure intended to reshape a patient’s nose. This could be done to create a more attractive appearance, assist in health related issues such as breathing problems, or both. Even the smallest of c

hanges to a person’s nose can have a huge impact on how they look and feel. Because of this, it is especially important to be open with and work closely with your plastic surgeon during the consultation process.

WHY MEN CHOOSE TO GO FOR RHINOPLASTY?

Men often complain of de-shaped nose of undesirable stature. So these may be the primary reasons of why men go for nose reshaping:

A good candidate for nose-reshaping cosmetic surgery may:

Have a nose that he or she feels is too large or too small in comparison with other facial features
Have a bump on the bridge of the nose
Have a wide nose
Have a nasal tip that droops, protrudes, or is enlarged
Have a bulbous tip
Have nostrils that are excessively flared or pinched
Have a nose that is crooked or off-center
Have been injured so that the nose is asymmetrical
Have problems breathing due to irregularities with internal nose structure (i.e. a deviated septum or related problems)

Nose reshaping or Rhinoplasty for men is performed with either of the following procedures:

The surgery is usually performed via the nostrils therefore leaving no external scars. Seldom, there is a need for external scars, mainly when reducing nostril size or in case of the tip surgery. In such situation, this will be discussed vigilantly during your pre-operative consultation. Here are the steps: 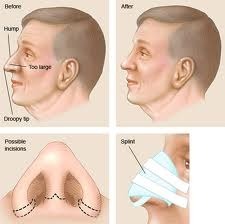 After Rhinoplasty surgery for men

After the surgery you need to rest in bed with your head raised higher than your chest, to reduce bleeding and swelling. Your nose may be congested because of swelling or from the splints placed inside your nose during surgery. In most cases, the internal dressings remain in place for one to seven days after surgery. Your doctor also tapes a splint to your nose for protection and support. It’s usually in place for about one week.

Slight bleeding and drainage of mucus and old blood are common for a few days after the surgery or after removing the dressing. Your doctor may place a “drip pad” — a small piece of gauze held in place with tape — under your nose to absorb drainage. Change the gauze as directed by your doctor. Don’t place the drip pad tight against your nose. 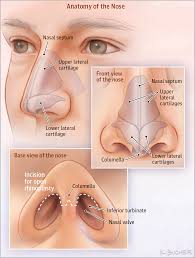 To further decrease the chances of bleeding and swelling, your doctor may ask that you follow these precautions for several weeks after surgery:

In addition, don’t rest eyeglasses or sunglasses on your nose for at least four weeks after the surgery, to prevent pressure on your nose. You can use cheek rests, or tape the glasses to your forehead until your nose has healed.

Use SPF 30 sunscreen when you’re outside, especially on your nose. Too much sun may cause permanent irregular discoloration in the skin of your nose.

Some temporary swelling or black-and-blue discoloration of your eyelids can occur for two to three weeks after nasal surgery. Swelling of the nose takes longer to resolve. Limiting your dietary sodium will help the swelling go away faster. Don’t put anything such as ice or cold packs on your nose after surgery.

Cost for Rhinoplasty for Men

Because rhinoplasty is different for each patient, the cost of rhinoplasty treatment will vary depending on a number of factors. Patients should discuss the total cost of surgery with their physicians, as well as payment and financing options.