Liposuction, also called lipoplasty, liposculpture suction, lipectomy, or lipo, is a type of cosmetic surgery that breaks up and “sucks” fat from the body. Liposuction is a surgical procedure that uses a suction technique done primarily to improve the body contours and proportion by removing excess fat deposits between the skin and muscle. The focus areas usually involve tummy, hips, thighs and arms which are often resistant to diet and exercise. Liposuction also shapes or contours these areas.

The following body areas are commonly targeted for liposuction treatment:

Liposuction works best for people with good skin tone and elasticity, where the skin molds itself into new contours.

People whose skin lacks elasticity may end up with loose-looking skin in areas where the procedure was done.

Who is the right candidate for a Liposuction?

Patients with the following conditions are considered to be suitable for this procedure:
• Area with excess fat resistant to “diet and exercise”
• Adults within 30% of their ideal weight who have firm, elastic skin and good muscle tone
• Non-smokers
• Healthy individuals, without any life-threatening illness or medical conditions that can impair healing
• Individuals with a positive outlook and specific goals in mind for body contouring
• Liposuction is equally effective for both men and women

Who are wrong candidates for Liposuction?

Women who are pregnant or nursing
Individuals with health problems that could interfere with their healing
People who are taking blood-thinning medications, unless they are able to discontinue use of these medications in the weeks leading up to and following surgery
People who are allergic to lidocaine, which is used in the procedure

What are Benefits of Liposuction 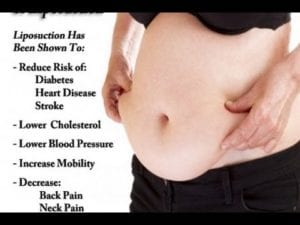 Liposuction is normally done for cosmetic purposes, but it is sometimes used to treat certain conditions like,

Lymphedema: A chronic, or long-term, condition in which excess fluid known as lymph collects in tissues, causing edema, or swelling. The edema commonly occurs in the arms or legs. Liposuction is sometimes used to reduce swelling, discomfort, and pain.

Lipodystrophy syndrome: Fat accumulates in one part of the body and is lost in another. Liposuction can improve the patient’s appearance by providing a more natural looking body fat distribution.

Extreme weight loss after obesity: A person with morbid obesity who loses at least 40 percent of their BMI may need treatment to remove excess skin and other abnormalities.

Lipomas: These are benign, fatty tumors.

What are the Liposuction risks involved?

Fortunately, significant complications from liposuction surgery are infrequent. Liposuction surgery is one of the two most common procedures performed by plastic surgeons.
The subject of risks and potential complications of surgery is best discussed on a personal basis between you and your plastic surgeon. Some of the potential complications that may be discussed with you include bleeding, infection, changes in sensation, scarring, allergic reactions, damage to underlying structures, need for revisions, unsatisfactory results possibly necessitating additional procedures and medical risks.
Other risks more specific to liposuction may include indentations and irregularities.
You can help minimise certain risks by following the advice and instructions of your plastic surgeon, both before and after your liposuction surgery.

Because liposuction is tailored to meet each person’s individual needs, the exact cost of liposuction can vary significantly from patient to patient. When determining the cost of treatment, there are a number of considerations to take into account.

The treatment area – Typically, larger areas such as the abdomen or back will cost more than smaller areas. However, costs can also be higher if a patient wishes to treat a particularly difficult area, such as the chin or cheeks.

Multiple treatment areas – Liposuction costs will be higher if a patient wants to enhance several parts of his or her body.

Body type – Because the final price is partially determined by the amount of fat removed, the treatment may cost more for larger patients.

The doctor – A highly experienced doctor with a reputation for excellence may charge more than a less knowledgeable or respected doctor.

The geographic area – Like most things, liposuction costs will vary depending on where a patient lives. It may cost more in a major metropolitan area than in a smaller town.

The first few days after surgery, you should rest quietly. Slight movement within the house will be permitted as early as 2 days. Patient will be wearing a garment and one should contact doctor in case of tight garment, pain fever, 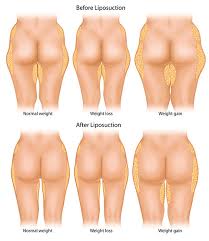 Before and After Liposuction

and soakage.
During the first 48 hours following surgery, patients experience varying degrees of swelling and bruising.

The swelling persists longer. Bruising typically disappears within seven to ten days. Stitches are usually removed within a week of surgery.
Straining, bending over and lifting should be avoided during the early postoperative period. In many instances, you will be able to resume most of your normal activities within ten days or less.

Are you looking for,

Second opinion from Expert surgeon for Liposuction in Delhi?

Ask for opinion at https://medcontour.org/get-expert-second-opinion/